Skip to main content
OUR COVID-19 RESPONSE
Get important health information and updates on our enhanced safety protections.
Resource Hub 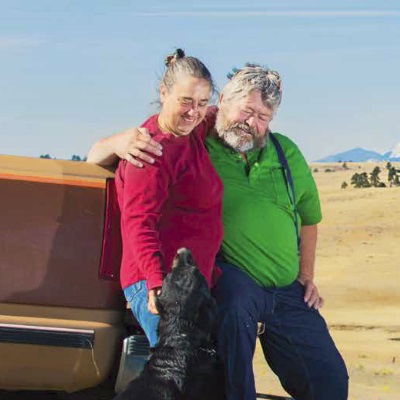 Walking out of a crushing injury

One day last spring, Caven Ronald finished breakfast and headed toward his tractor on his property near the rural town of Elizabeth. As he’d done countless times before, he went to warm up the John Deere before tackling the morning’s project. But that day, the tractor didn’t cooperate.

“Instead of just starting, it decided to go, and I couldn’t get out of the way,” says Caven, who knew firing up farm equipment from the ground was a no-no. But after the monstrous back tire rolled over him, crushing his pelvis, Caven is not likely to do it again. “I was on the ground,
realizing this wasn’t going to turn out well.”

His wife, who had been vacuuming, stopped and noticed the silence. Caven had crawled about 150 feet when she found him, and she called 9-1-1. Today, Caven thanks the quick response of the local fire department for saving his life, and the staff at Spalding Rehabilitation Hospital for helping him get it back on track.

The tractor left Caven with an “open-book pelvis injury,” called that for the way it splays the front pelvis open, like a book. Strong core ligaments are torn and arteries and veins compromised. The injury requires rapid emergency care, invasive treatment, and a long (three months at Spalding) recovery, much of it with him nearly immobilized.

“I couldn’t do much until the bones healed,” says Caven, who had an external fixator holding his pelvis together, a contraption with steel rods that protruded out his front and sides. “I was at the mercy of the people around me.”

But Caven says he was impressed with the Spalding staff from the get-go. “They work really hard on making you do things from the very beginning. They got me into a wheelchair and outside. That was huge, getting outdoors. They helped with keeping my spirits up and looking to the future,” Caven says. “They told me I was going to get better, in time.”

The real work came when it was time to get back on his feet. “The hardest thing to believe is when they tell you after five months in bed, you’ll have to learn to walk again. You think that just can’t be right. Well let me tell you, it is right.”

Muscle and nerve damage slow the process, and Caven says he was amazed by the team’s hard work. “I don’t know how they do it.” But they did, getting him ready for a walker before he went home. There, he still gets in-home therapy from a therapist Spalding recommended, and he’s climbing stairs and rarely using a cane now.

“I feel lucky that I’ve had such good care,” Caven says, adding that he is also grateful for his wife. “Our life has changed so drastically quickly. I’m really lucky that I have somebody. If I start feeling negative, she’s good at turning that around.” There is one thing she doesn’t maintain
positive thoughts about, however, he says: the tractor. She sold it. “She said what she really wanted to do was shoot it.”